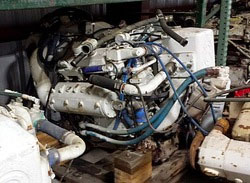 All diesel marine engine manufacturers have a ‘duty-cycle’ rating system for their products, but the general rule is that the more horse power you extract from any given displacement engine, the shorter the lifespan will be between the rebuilds. Caterpillar, the most predominantly sought after diesel marine engine in the U.S., has five different ratings for their engines, A through E. Other manufacturers generally follow the same format but may call them by different names. The most heavy-duty engine (A-rated) is called ‘continuous-duty’ and these are for applications that may run over 8,000 hours per year. These are vessels that typically run 24/7 in their application. These engines usually run at no more than 1,200-1,800 rpm and can easily run 30-40,000 hours between overhauls if proper maintenance intervals are adhered to and high-quality lubricants and filters are used.

At the top of the high-performance food chain is the pleasure craft ‘E’ rated engines that are for minimal annual usage not exceeding 1,000 hours per year. These engines typically operate in the 2,300-3,800 rpm range and some import brands up to 4,200 rpm! Average life expectancy between rebuilds of pleasure craft rated engines may only be in the 5-8,000 hours range and the really high strung models may only be good for 1,000 hours! Many of the popular models of Caterpillar engines have multiple ratings associated with them. For example, the Cat 3412E engine has ratings available in all five classes ranging from 425 hp at 1,200 rpm up to 1,400 hp at 2,300 rpm. The basic cylinder blocks are all the same but internal and external parts are varied as performance demands go up.

The Difference Between Hoists and Winches

The Difference Between Hoists and Winches

Get industry updates and alerts on new product arrivals delivered right to your inbox.